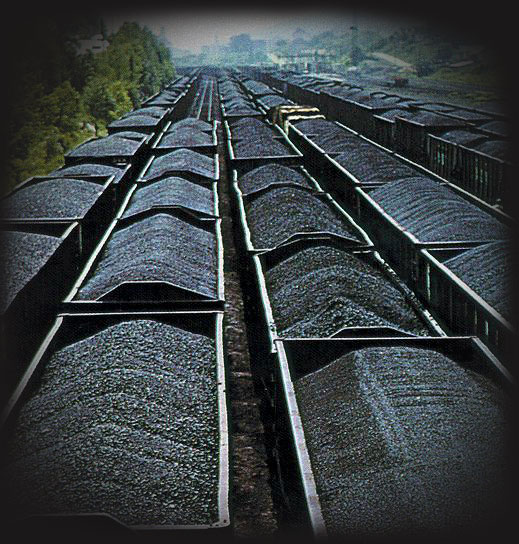 Steam or Thermal Coal
Coal power is a rather simple process. In most coal fired power plants, lumps of coal are crushed into fine powder and are fed into a combustion unit where it is burned. Heat from the burning coal is used to generate steam that is used to spin one or more turbines to generate electricity.  The concept of burning coal that has been pulverized into a fine powder stems from the belief that if the coal is made fine enough, it will burn almost as easily and efficiently as a gas. The feeding rate of coal according to the boiler demand and the amount of air available for drying and transporting the pulverized coal fuel is controlled by computers.

Pieces of coal are crushed between balls or cylindrical rollers that move between two tracks or “races.” The raw coal is then fed into the pulveriser along with air heated to about 650 degrees F from the boiler. As the coal gets crushed by the rolling action, the hot air dries it and blows the usable fine coal powder out to be used as fuel. The powdered coal from the pulveriser is directly blown to a burner in the boiler. The burner mixes the powdered coal in the air suspension with additional pre-heated combustion air and forces it out of a nozzle similar in action to fuel being atomised by a fuel injector in modern cars.

Under operating conditions, there is enough heat in the combustion zone to ignite all the incoming fuel.  In 1884, an efficient high speed steam turbine was developed by British engineer Charles A. Parsons which replaced the use of steam engines to generate electricity.  In the 1920s, the pulverized coal firing was developed. This process brought advantages that included a higher combustion temperature, improved thermal efficiency and a lower requirement for excess air for combustion.  In the 1940s, the cyclone furnace was developed. This new technology allowed the combustion of poorer grade of coal with less ash production and greater overall efficiency.

Presently, coal power is still based on the same methods started over 100 years ago, but improvements in all areas have brought coal power to be the inexpensive power source used so widely today.  Cyclone furnaces were developed after pulverized coal systems and require less processing of the coal fuel. They can burn poorer grade coals with higher moisture contents and ash contents to 25%. The crushed coal feed is either stored temporarily in bins or transported directly to the cyclone furnace. The furnace is basically a large cylinder jacketed with water pipes that absorb the some of the heat to make steam and protect the burner itself from melting down. A high powered fan blows the heated air and chunks of coal into one end of the cylinder. At the same time additional heated combustion air is injected along the curved surface of the cylinder causing the coal and air mixture to swirl in a centrifugal “cyclone” motion. The whirling of the air and coal enhances the burning properties producing high heat densities (about 4700 to 8300kW/m2) and high combustion temperatures.

The hot combustion gases leave the other end of the cylinder and enter the boiler to heat the water filled pipes and produce steam. Like in the pulverized coal burning process, all the fuel that enters the cyclone burns when injected once the furnace is at its operating temperature. Some slag remains on the walls insulating the burner and directing the heat into the boiler while the rest drains through a trench in the bottom to a collection tank where it is solidified and disposed of. This ability to collect ash is the biggest advantage of the cyclone furnace burning process. Only 40% of the ash leaves with the exhaust gases compared with 80% for pulverized coal burning. Cyclone furnaces are not without disadvantages. The coal used must have a relatively low sulfur content in order for most of the ash to melt for collection. In addition, high power fans are required to move the larger coal pieces and air forcefully through the furnace, and more nitrogen oxide pollutants are produced compared with pulverized coal combustion. Finally, the actual burner requires yearly replacement of its liners due to the erosion caused by the high velocity of the coal.